THE WORLD OF CALLIGRAPHY

"Fatta ad arte" is a common term in Italian meaning "made with art". These were words used by Carlo Buffa in his description of the calligraphy shown in the exhibition. The third level of the tower contained the exhibition's largest body of work. Over 200 pieces were shown by 26 artists representing 9 countries. Internationally known artists including Georgia Deaver (US), Gaynor Goffe, Michael Harvey and Tom Perkins (UK), Brody Neuenschwander (Belgium) and Hermann Kilian (Germany), were represented.

Works demonstrating traditional alphabets and techniques were included along with original modern expressive pieces. The emphasis however was on commercial graphic applications.

Seven calligraphers from Italy exhibited works. And although the renewed interest here is fairly recent, the quality of the work and skills demonstrated by the Italians stood up very well in this exhibit. The works of Anna Ronchi and Monica Dengo, who have both studied at Roehampton in London, illustrate their knowledge and understanding of strong letterforms composition. James Clough (originally from the UK) but a long-time resident of Milan, exhibited many professionally executed commercial letter headings and logo designs.

The traditional gilding and illumination techniques shown in works by Carlo Buffa are of the highest standard. It is remarkable to me that Carlo, like so many of the Italian calligraphers at this point in time, is essentially self-taught, learning from books, both ancient and modern. 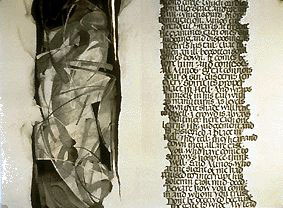 The second floor was dedicated to a presentation of my own current work. The pieces which I had brought with me from San Francisco where part of a commission on canto V of Dante's Inferno. They seemed to be a logical choice for an exhibition in Italy. Little did I know how perfect the choice would be. The works, arranged side by side as a series, with the only lighting in the room being directed on the pieces, created a dramatic atmosphere.

The mysterious, torturous history of the darkened brick walls of this ancient inferno, this tower with Dante's works inscribed on it, was ever-present in the atmosphere of the Gallery. The interest in the work and its reception by the local community seemed genuine and was filled with enthusiasm.

The work also served an educational function, as children from the surrounding communities, who in Italy still study the works of Dante, were being brought by their teachers to the exhibition.