THE SCRIPT SPEAKS
with Brody Neuenschwander 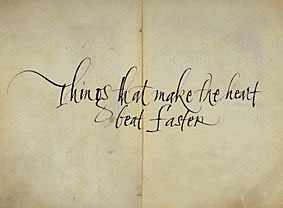 Brody's script, text from the film The Pillow Book by Peter Greenaway.

From the 30th of March to 15th of April 1996.
Many things are expressed by the spoken word: voice tone, pauses, emphasis and the personality of the speaker - tell us much more than the bare content of the text.

The written word by contrast, loses some of there attributes whilst maintaining the intrinsic meaning of the content. The history of our alphabet's graphic form is vast and complex - so much so that a lifetime is not enough to explore it in its entirety.

The growth of letter-forms and their disposition has been dictated by the evolution of both instruments and technology: a goose quill pen, cuneiform stylus on metal type, will all determine the different forms which descript will take, as well as its composition.

With the advancement of electronic technologies has come a greater diffusion of productive capacities - as was the case with the early printers - with the inevitable lowering of standards and loss of refinement, but also accompanied by the potential for a great widening of expressive possibilities. In video images, one can observe the last phases of the interpretation of electronic tecnologies in video post-production.

Thanks to increasingly cheap and user-friendly computer software, the insertion of static or animated graphic images on film has become increasingly sophisticated.

Witness the cultured work of director Peter Greenaway, integrated with the skilled calligraphy of Brody Neuenschwander; American and English advertising videos also use the written word in an innovative and sometimes amazing manner as many film excellently done titles: all this gives us the impression that, indeed, "The Script Speaks". 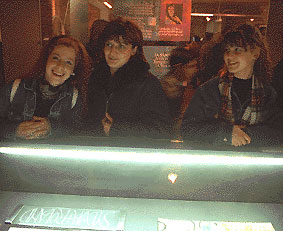 Some people during the exhibition
previous page - next page